Randy Shaw director of the Tenderloin Housing Clinic critiques and applauds activism in San Francisco and speaks of his new book “The Activists Handbook”. 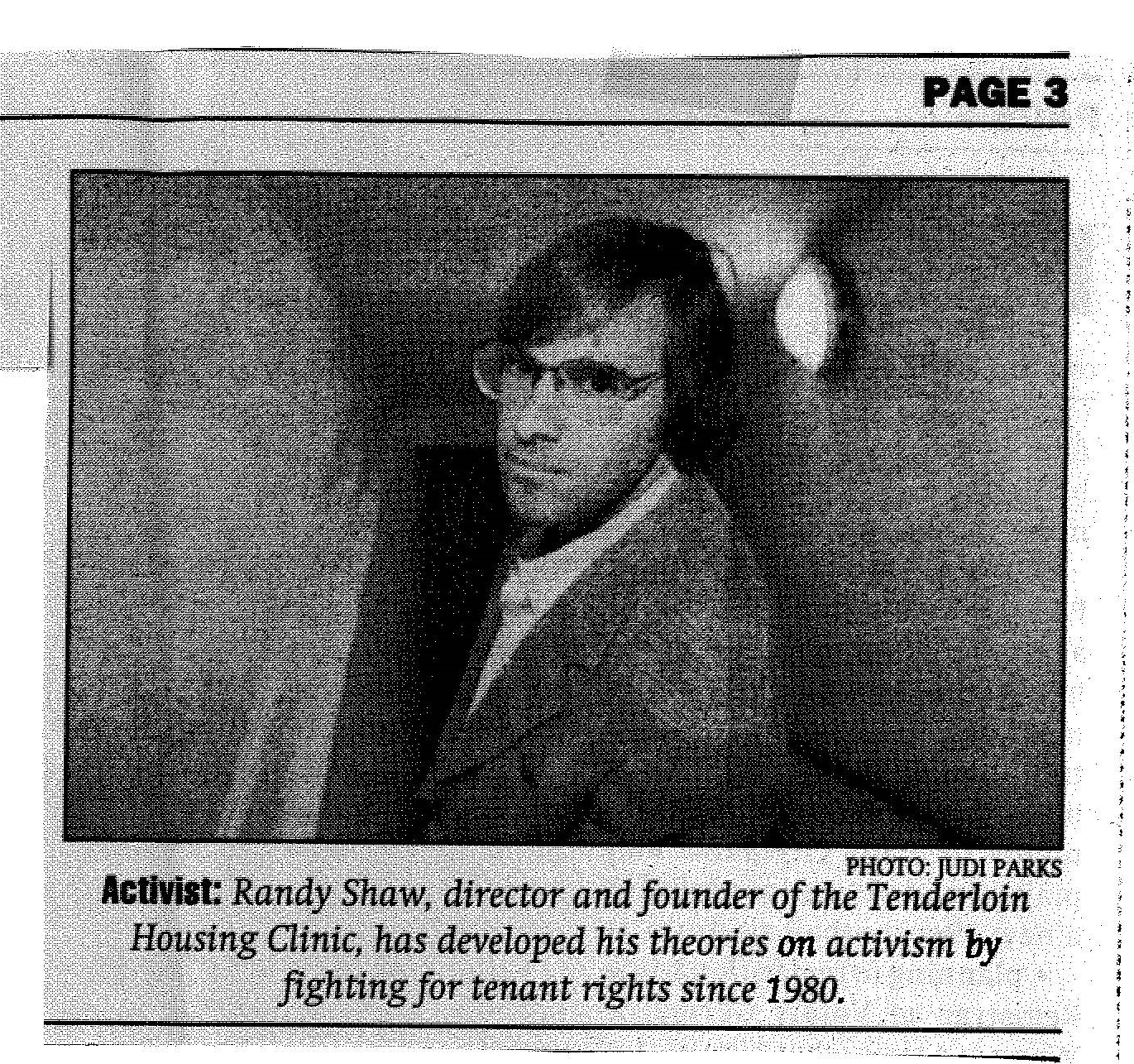 Activism? He Wrote the Book On It –

Grassroots efforts to aid the homeless, for example, have channeled enormous amounts of publicenergy in the wrong direction, Shaw contends.

“Public concern over homelessness has been eclipsed by other issues, particularly crime; conservatives’ success at portraying the visible homeless as threats to public safety no doubt contributed to this shift,” Shaw writes.

As a result, he says, homeless rights advocates frequently take the defensive against efforts such as Matrix – former mayor Frank Jordan’s police crackdown on public-nuisance crimes – rather than strike out on a more proactive campaign to address the housing needs of the city’s indigent population.

“The public doesn’t know what the identity of the problem is,” Shaw, 39, said in a recent interview. “The media only sees homelessness in terms of panhandling, camping, and Matrix.” ,

Throughout the  “Handbook,” Shaw surveys the local realm of social activism, critiquing certain efforts and linking them to national mobilization efforts.

Historically, the most successful activist movements have started close to home, where people feel the strictures of oppression in their daily lives.

Rosa Parks’ famous bus ride and the contentious mission of AIDS activists in Act Up are just two examples Shaw gives of common citizens pushing back against the system.

Having spent years in activism’s trenches as director and supervising attorney of the controversial Tenderloin Housing Clinic, Shaw writes from his own experience.

“I never thought I would write a book,” he said, noting that he was inspired by past newspaper articles that had reported on the clinic’s growth since 1980.

Originally created by Shaw and other first-year law students at Hastings College of the Law, the clinic has grown into a $1 million annual operation, providing low-income housing for city residents and initiating lawsuits against residential hotels that tenants have accused of mismanagement.

Critics have accused the non-profit clinic of profiteering through activism, of cashing in on its legal assault against landlords and businesses on behalf of residents.

“There isn’t a nonprofit law office in the city that doesn’t make money from lawsuits,” he said.

“We’re involved in the political process, and that’s what a lot of people don’t like.”

The clinic was instrumental in the passage of Proposition H (1992), devising tighter rent-control laws, and Proposition G (1994), which created the Department of Building Inspection.

Taking an aggressive role in writing the rules that dictate the rights of low-income tenants is in keeping “The Handbook’s” central message:

“Activists must develop an agenda and then focus their resources on realizing it.”

The recent efforts by BayviewHunters Point residents to rout a proposal for a cogeneration power plant in their neighborhood, Mission High School students’ march on City Hall to protest the firing of key administrative figures, and the ongoing efforts of groups such as Coleman Advocates on the behalf of children’s rights are some of the most visible examples of activism with an agenda, Shaw says.

“A lot of stuff goes on that doesn’t get covered in the newspapers,” Shaw said.

“The media doesn’t cover large assemblages of people anymore, like they did in the ’60s, because it’s not unique.

‘We’re involved in the political process, and that’s what a lot of people don’t like.