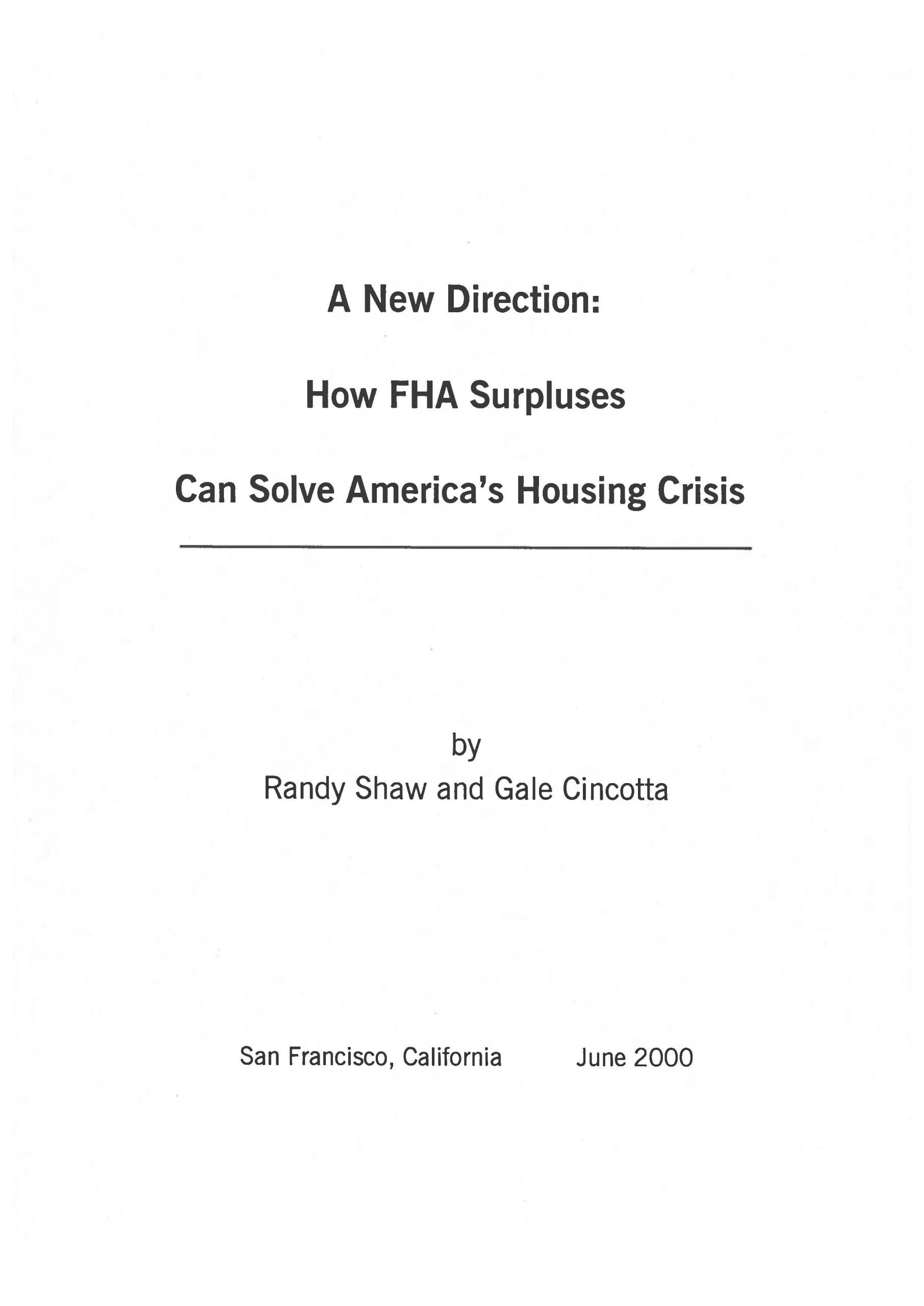 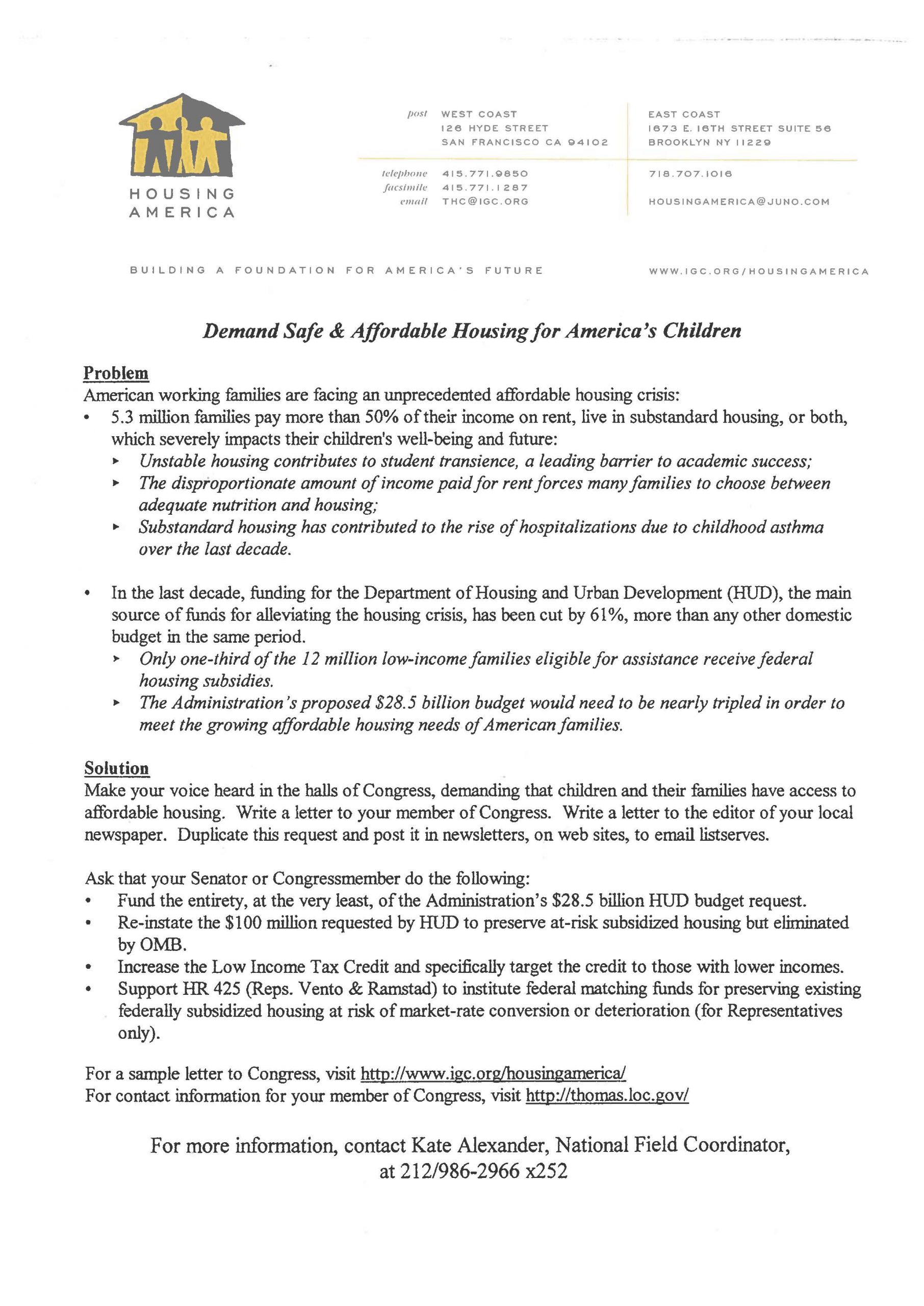 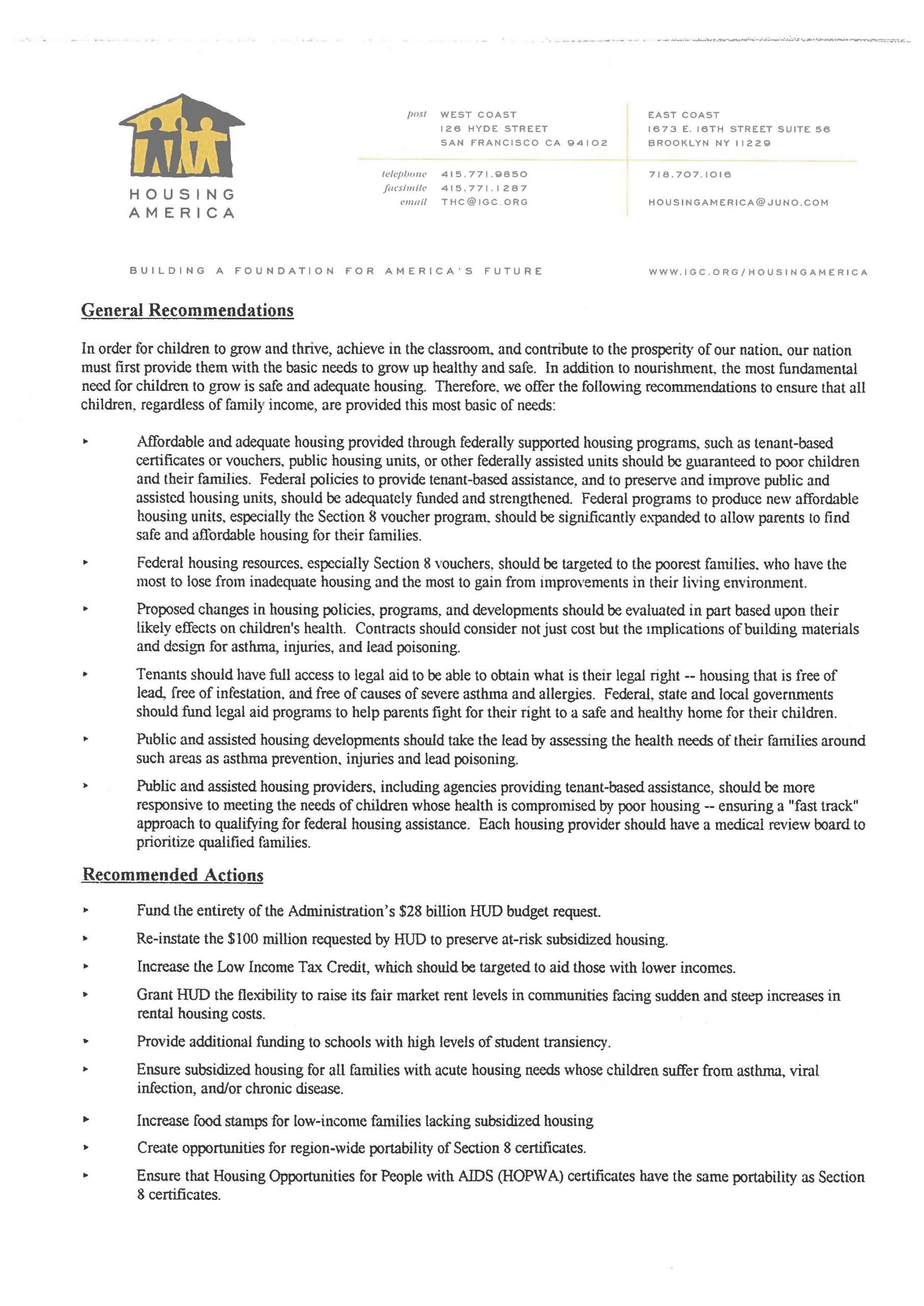 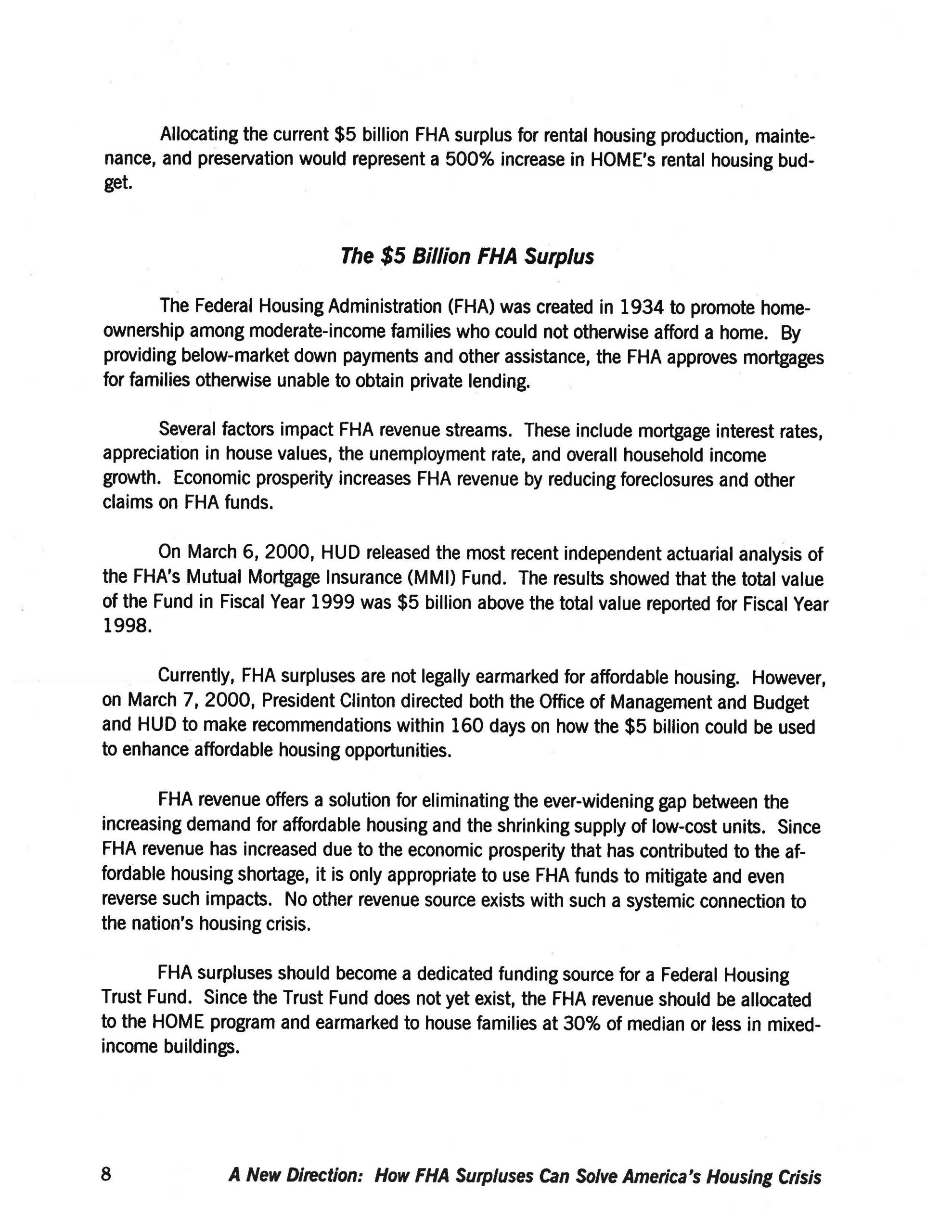 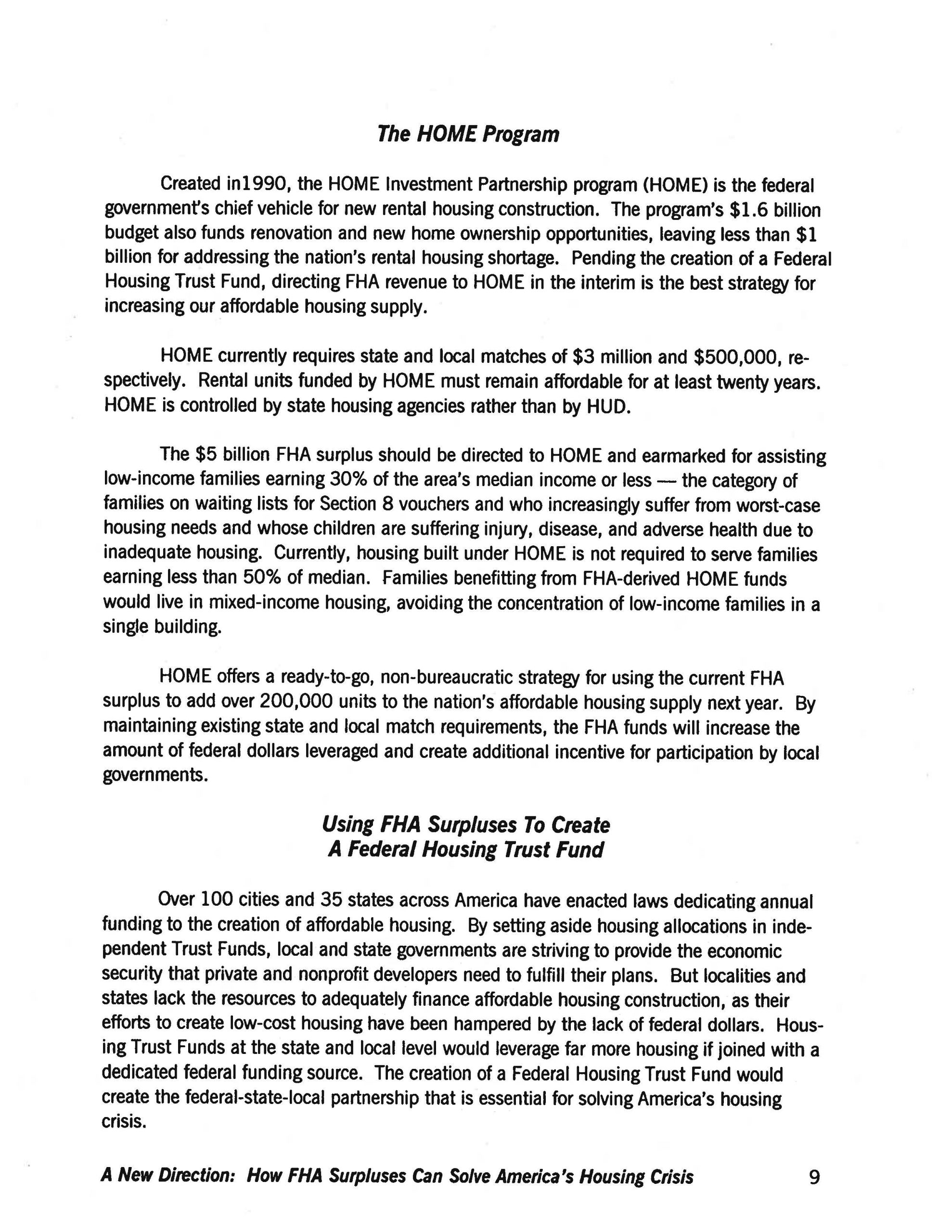 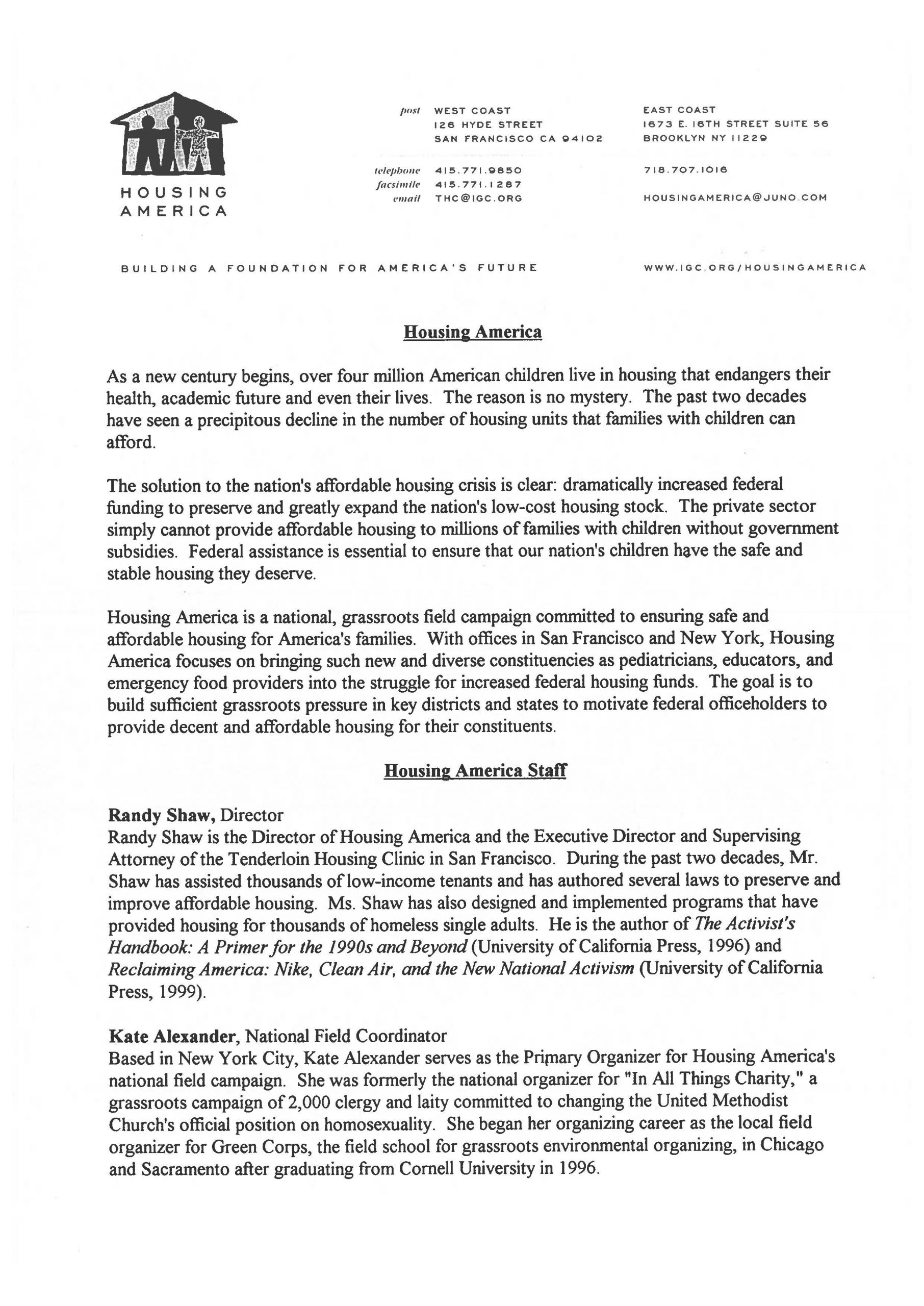 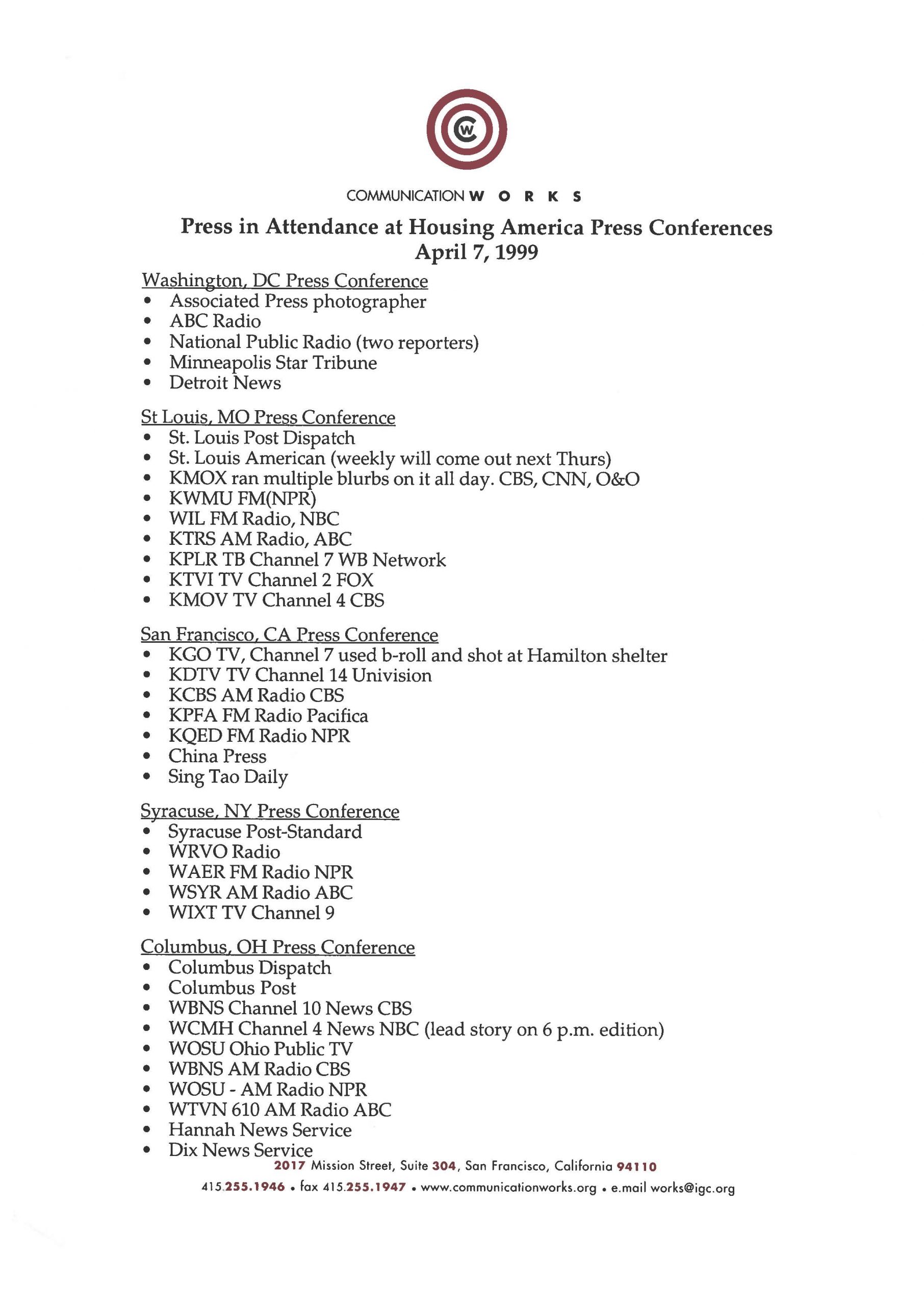 Solution
Make your voice heard in the halls of Congress, demanding that children and their families have access to affordable housing. Write a letter to your member of Congress. Write a letter to the editor of your local newspaper. Duplicate this request and post it in newsletters, on web sites, to email listserves.

Ask that your Senator or Congressmember do the following:

General Recommendations
In order for children to grow and thrive, achieve in the classroom, and contribute to the prosperity of our nation, our nation must first provide them with the basic needs to grow up healthy and safe. In addition to nourishment, the most fundamental need for children to grow is safe and adequate housing. Therefore, we offer the following recommendations to ensure that all children, regardless of family income, are provided this most basic of needs:

The Federal Housing Administration (FHA) was created in 1934 to promote homeownership among moderate-income families who could not otherwise afford a home. By providing below-market down payments and other assistance, the FHA approves mortgages for families otherwise unable to obtain private lending.

Currently, FHA surpluses are not legally earmarked for affordable housing. However, on March 7, 2000, President Clinton directed both the Office of Management and Budget and HUD to make recommendations within 160 days on how the $5 billion could be used to enhance affordable housing opportunities.

FHA revenue offers a solution for eliminating the ever-widening gap between the increasing demand for affordable housing and the shrinking supply of low-cost units. Since FHA revenue has increased due to the economic prosperity that has contributed to the affordable housing shortage, it is only appropriate to use FHA funds to mitigate and even reverse such impacts. No other revenue source exists with such a systemic connection to the nation’s housing crisis.

FHA surpluses should become a dedicated funding source for a Federal Housing Trust Fund. Since the Trust Fund does not yet exist, the FHA revenue should be allocated to the HOME program and earmarked to house families at 30% of median or less in mixed-income buildings.

HOME currently requires state and local matches of $3 million and $500,000, respectively. Rental units funded by HOME must remain affordable for at least twenty years. HOME is controlled by state housing agencies rather than by HUD.

The $5 billion FHA surplus should be directed to HOME and earmarked for assisting low-income families earning 30% of the area’s median income or less the category of families on waiting lists for Section 8 vouchers and who increasingly suffer from worst-case housing needs and whose children are suffering injury, disease, and adverse health due to inadequate housing. Currently, housing built under HOME is not required to serve families earning less than 50% of the median. Families benefiting from FHA-derived HOME funds would live in mixed-income housing, avoiding the concentration of low-income families in a single building.

HOME offers a ready-to-go, non-bureaucratic strategy for using the current FHA surplus to add over 200,000 units to the nation’s affordable housing supply next year. By maintaining existing state and local match requirements, the FHA funds will increase the amount of federal dollars leveraged and create additional incentive for participation by local governments.

Over 100 cities and 35 states across America have enacted laws dedicating annual funding to the creation of affordable housing. By setting aside housing allocations in independent Trust Funds, local and state governments are striving to provide the economic security that private and nonprofit developers need to fulfill their plans. But localities and states lack the resources to adequately finance affordable housing construction, as their efforts to create low-cost housing have been hampered by the lack of federal dollars. Housing Trust Funds at the state and local level would leverage far more housing if joined with a dedicated federal funding source. The creation of a Federal Housing Trust Fund would create the federal-state-local partnership that is essential for solving America’s housing crisis.

Housing America
As a new century begins, over four million American children live in housing that endangers their health, academic future and even their lives. The reason is no mystery. The past two decades have seen a precipitous decline in the number of housing units that families with children can afford.

Housing America is a national, grassroots field campaign committed to ensuring safe and affordable housing for America’s families. With offices in San Francisco and New York, Housing America focuses on bringing such new and diverse constituencies as pediatricians, educators, and emergency food providers into the struggle for increased federal housing funds. The goal is to build sufficient grassroots pressure in key districts and states to motivate federal officeholders to provide decent and affordable housing for their constituents.

Randy Shaw, Director
Randy Shaw is the Director of Housing America and the Executive Director and Supervising Attorney of the Tenderloin Housing Clinic in San Francisco. During the past two decades, Mr. Shaw has assisted thousands of low-income tenants and has authored several laws to preserve and improve affordable housing. Ms. Shaw has also designed and implemented programs that have provided housing for thousands of homeless single adults. He is the author of The Activist’s Handbook: A Primer for the 1990s and Beyond (University of California Press, 1996) and Reclaiming America: Nike, Clean Air, and the New National Activism (University of California Press, 1999).

Kate Alexander, National Field Coordinator
Based in New York City, Kate Alexander serves as the Primary Organizer for Housing America’s national field campaign. She was formerly the national organizer for “In All Things Charity,” a grassroots campaign of 2,000 clergy and laity committed to changing the United Methodist Church’s official position on homosexuality. She began her organizing career as the local field organizer for Green Corps, the field school for grassroots environmental organizing, in Chicago and Sacramento after graduating from Cornell University in 1996.