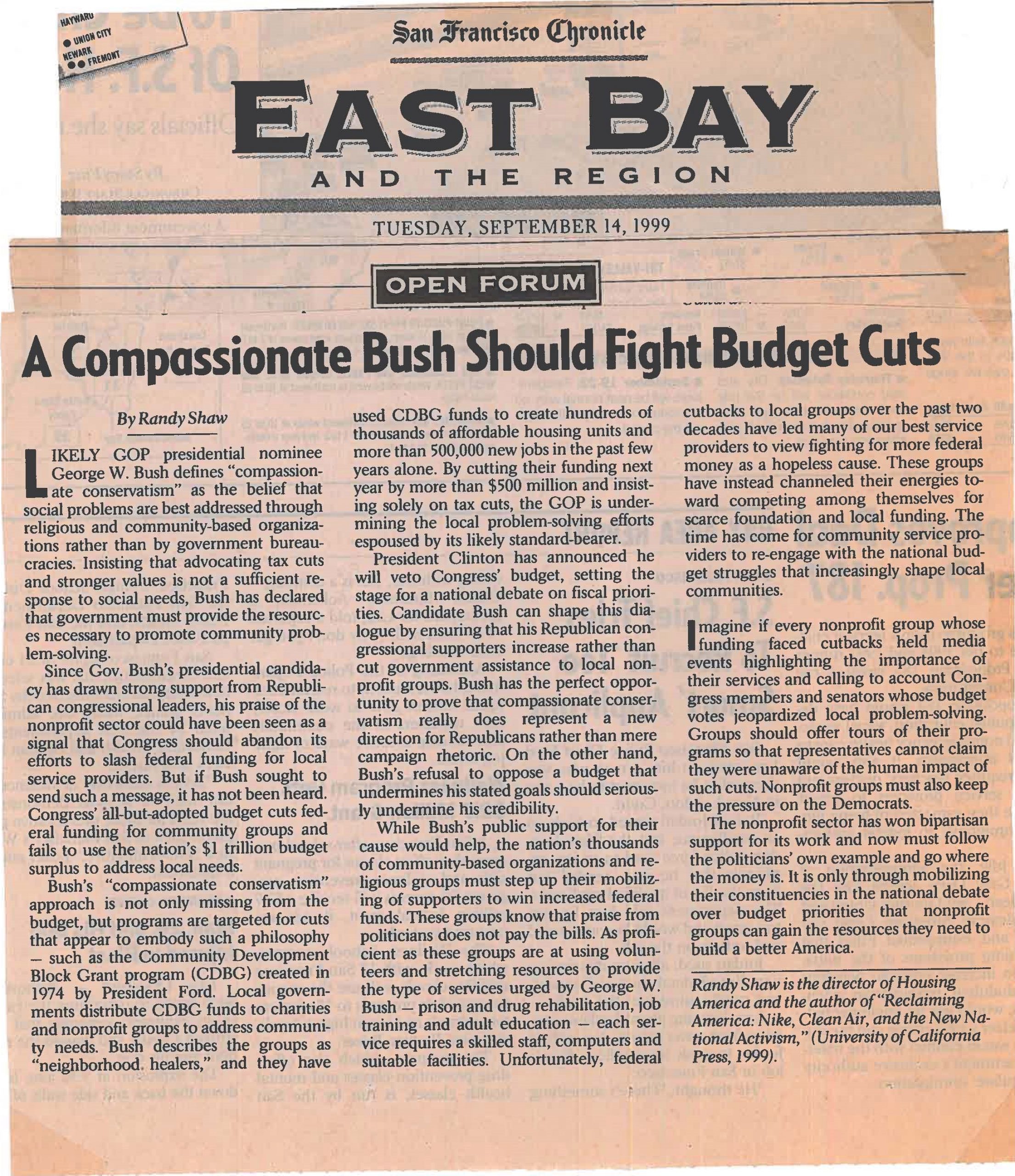 Likely GOP presidential nominee George W. Bush defines “compassionate conservatism” as the belief that social problems are best addressed through religious and community-based organizations rather than by government bureaucracies. Insisting that advocating tax cuts and stronger values is not a sufficient response to social needs, Bush has declared that the government must provide the resources necessary to promote community problem-solving.

Since Gov. Bush’s presidential candidacy has drawn strong support from Republican congressional leaders, his praise of the nonprofit sector could have been seen as a signal that Congress should abandon its efforts to slash federal funding for local service providers. But if Bush sought to send such a message, it has not been heard. Congress’ all-but-adopted budget cuts federal funding for community groups and fails to use the nation’s $1 trillion budget surplus to address local needs.

Bush’s “compassionate conservatism” approach is not only missing from the budget, but programs are targeted for cuts that appear to embody such a philosophy — such as the Community Development Block Grant program (CDBG) created in 1974 by President Ford. Local governments distribute CDBG funds to charities and nonprofit groups to address community needs. Bush describes the groups as “neighborhood healers,” and they have used CDBG funds to create hundreds of thousands of affordable housing units and more than 500,000 new jobs in the past few years alone. By cutting their funding next year by more than $500 million and insisting solely on tax cuts, the GOP is undermining the local problem-solving efforts espoused by its likely standard-bearer.

President Clinton has announced he will veto Congress’ budget, setting the stage for a national debate on fiscal priorities. Candidate Bush can shape this dialogue by ensuring that his Republican congressional supporters increase rather than cut government assistance to local nonprofit groups. Bush has the perfect opportunity to prove that compassionate conservatism really does represent a new direction for Republicans rather than mere campaign rhetoric. On the other hand, Bush’s refusal to oppose a budget that undermines his stated goals should seriously undermine his credibility.

While Bush’s public support for their cause would help, the nation’s thousands of community-based organizations and religious groups must step up their mobilizing of supporters to win increased federal funds. These groups know that praise from politicians does not pay the bills. As proficient as these groups are at using volunteers and stretching resources to provide the type of services urged by George W. Bush – prison and drug rehabilitation, job training and adult education – each service requires a skilled staff, computers, and suitable facilities.

Unfortunately, federal cutbacks to local groups over the past two decades have led many of our best service providers to view fighting for more federal money as a hopeless cause. These groups have instead channeled their energies to ward competing among themselves for scarce foundation and local funding. The time has come for community service providers to re-engage with the national budget struggles that increasingly shape local communities.

Imagine if every nonprofit group whose funding faced cutbacks held media events highlighting the importance of their services and calling to account Congress members and senators whose budget votes jeopardized local problem-solving. Groups should offer tours of their programs so that representatives cannot claim they were unaware of the human impact of such cuts. Nonprofit groups must also keep the pressure on the Democrats. The nonprofit sector has won bipartisan support for its work and now must follow the politicians’ own example and go where the money is. It is only through mobilizing their constituencies in the national debate over budget priorities that nonprofit groups can gain the resources they need to build a better America.

Randy Shaw is the director of Housing America and the author of “Reclaiming America: Nike, Clean Air, and the New National Activism,” (University of California Press, 1999).