Hotel Jefferson a 90 room SRO managed by Tenderloin Housing Clinic is set to open. This after the closure of the Mission Rock Homeless Shelter, the new SRO will house at least 60 of the people who were displaced. 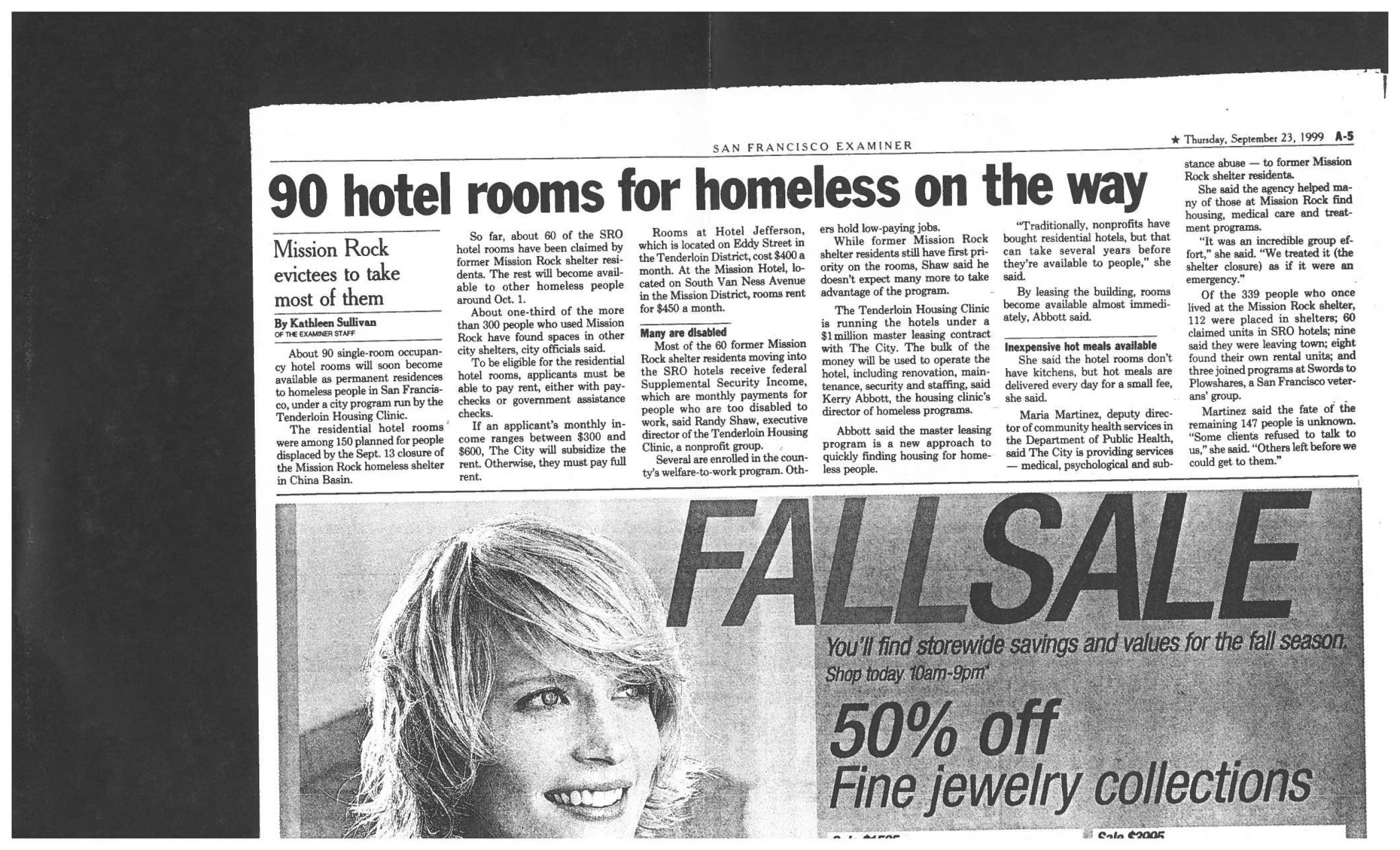 90 Hotel Rooms For Homeless On The Way

Mission Rock evictees to take most of them

By Kathleen Sullivan
OF THE EXAMINER STAFF

About 90 single-room occupancy hotel rooms will soon become available as permanent residences to homeless people in San Francisco, under a city program run by the Tenderloin Housing Clinic.

The residential hotel rooms were among 150 planned for people displaced by the Sept. 13 closure of the Mission Rock homeless shelter in China Basin.

So far, about 60 of the SRO hotel rooms have been claimed by former Mission Rock shelter resi-dents. The rest will become available to other homeless people around Oct. 1.

About one-third of the more than 300 people who used Mission Rock have found spaces in other city shelters, city officials said.

To be eligible for the residential hotel rooms, applicants must be able to pay rent, either with paychecks or government assistance checks.

If an applicant’s monthly income ranges between $300 and $600, The City will subsidize the rent. Otherwise, they must pay full rent.

Most of the 60 former Mission Rock shelter residents moving into the SRO hotels receive federal Supplemental Security Income, which are monthly payments for people who are too disabled to work, said Randy Shaw, executive director of the Tenderloin Housing Clinic, a nonprofit group.

Several are enrolled in the county’s welfare-to-work program. Others hold low-paying jobs.

While former Mission Rock shelter residents still have first priority on the rooms, Shaw said he doesn’t expect many more to take advantage of the program.

The Tenderloin Housing Clinic is running the hotels under a $1 million master leasing contract with The City. The bulk of the money will be used to operate the hotel, including renovation, maintenance, security and staffing, said Kerry Abbott, the housing clinic’s director of homeless programs.

“Traditionally, nonprofits have bought residential hotels, but that can take several years before they’re available to people,” she said

She said the hotel rooms don’t have kitchens, but hot meals are delivered every day for a small fee, she said.

She said the agency helped many of those at Mission Rock find housing, medical care and treatment programs.

“It was an incredible group effort,” she said. “We treated it (the shelter closure) as if it were an emergency.”

Of the 339 people who once lived at the Mission Rock shelter, 112 were placed in shelters; 60 claimed units in SRO hotels; nine said they were leaving town; eight found their own rental units; and three joined programs at Swords to Plowshares, a San Francisco veterans’ group.

Martinez said the fate of the remaining 147 people is unknown. “Some clients refused to talk to us,” she said. “Others left before we could get to them.”