SF courts get the first landlord challenge to a law requiring owners to get permission from the City’s Planning Commission prior to converting buildings to a new use. 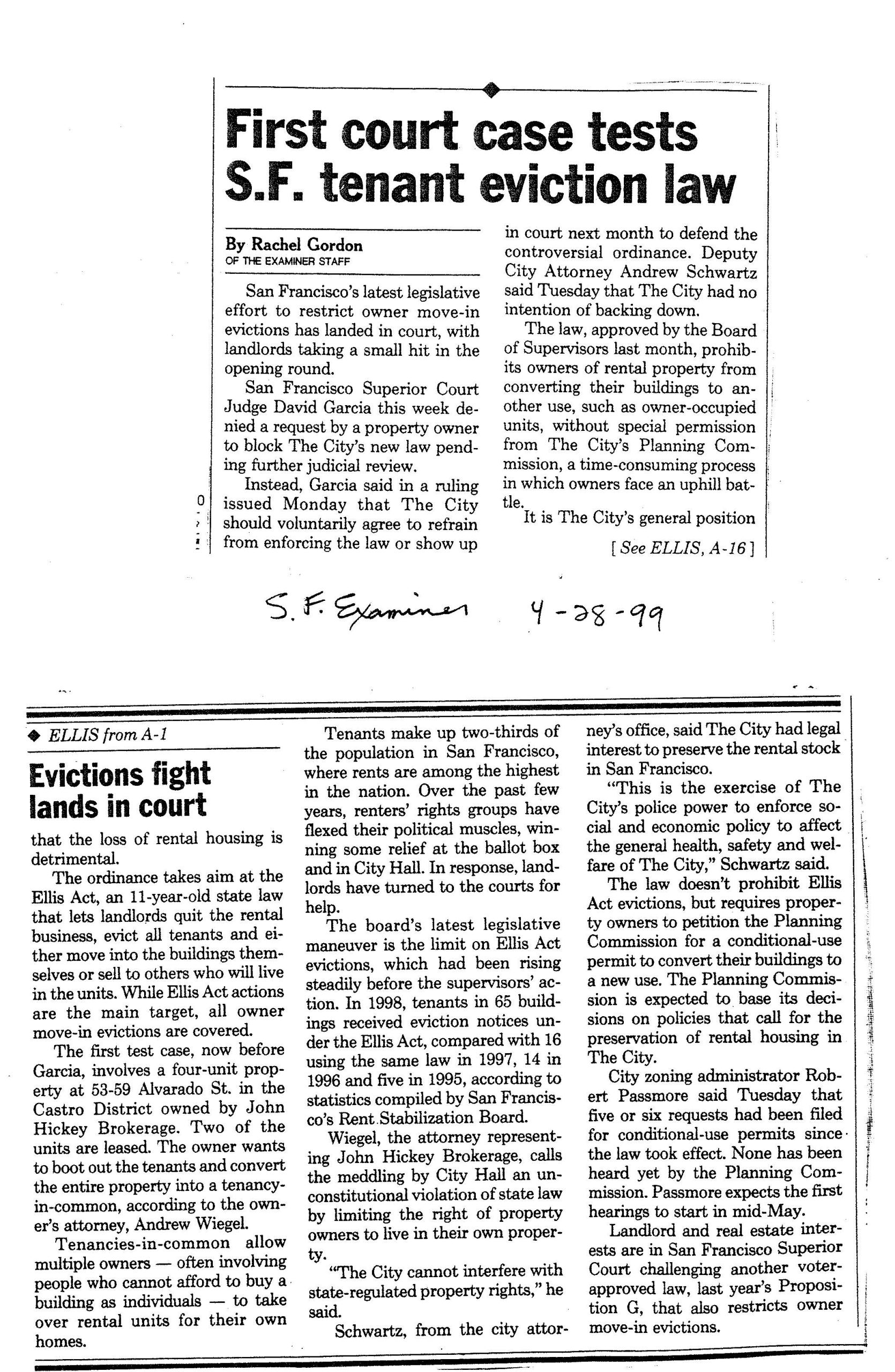 By Rachel Gordon
Of the Examiner Staff

Instead, Garcia said in a ruling issued Monday that The City should voluntarily agree to refrain from enforcing the law or show up in court next month to defend the controversial ordinance. Deputy City Attorney Andrew Schwartz said Tuesday that The City had no intention of backing down.

The law, approved by the Board of Supervisors last month, prohibits owners of rental property from converting their buildings to another use, such as owner-occupied units, without special permission from The City’s Planning Commission, a time-consuming process in which owners face an uphill battle. It is The City’s general position that the loss of rental housing is detrimental.

The ordinance takes aim at the Ellis Act, an 11-year-old state law that lets landlords quit the rental business, evict all tenants and either move into the buildings themselves or sell to others who will live in the units. While Ellis Act actions are the main target, all owner move-in evictions are covered.

The first test case, now before Garcia, involves a four-unit property at 53-59 Alvarado St. in the Castro District owned by John Hickey Brokerage. Two of the units are leased. The owner wants to boot out the tenants and convert the entire property into a tenancy-in-common, according to the owner’s attorney, Andrew Wiegel.

Tenancies-in-common allow multiple owners — often involving people who cannot afford to buy a building as individuals — to take over rental units for their own homes.

Tenants make up two-thirds of the population in San Francisco, where rents are among the highest in the nation. Over the past few years, renters’ rights groups have flexed their political muscles, winning some relief at the ballot box and in City Hall. In response, landlords have turned to the courts for help.

The board’s latest legislative maneuver is the limit on Ellis Act evictions, which had been rising steadily before the supervisors’ action. In 1998, tenants on 65 buildings received eviction notices under the Ellis Act, compared with 16 using the same law in 1997, 14 in 1996 and five in 1995, according to statistics compiled by San Francisco’s Rent Stabilization Board.

Wiegel, the attorney representing John Hickey Brokerage, calls the meddling by City Hall an unconstitutional violation of state law by limiting the right of property owners to live in their own property.

“The City cannot interfere with state-regulated property rights,” he said.

Schwartz, from the city attorney’s office, said The City had legal interest to preserve the rental stock in San Francisco. “This is the exercise of The City’s police power to enforce social and economic policy to affect the general health, safety and welfare of The City,” Schwartz said.

The law doesn’t prohibit Ellis Act evictions, but requires property owners to petition the Planning Commission for a conditional-use permit to convert their buildings to a new use. The Planning Commission is expected to base its decisions on policies that call for the preservation of rental housing in The City.

City zoning administrator Robert Passmore said Tuesday that five or six requests had been filed for conditional-use permits since the law took effect. None has been heard yet by the Planning Commission. Passmore expects the first hearings to start in mid-May.