In this 1994 publication, Warren Hinkle exposes the continued failure of the Bureau of Building Inspection (BBI) to protect low-income residents, the BBI’s unfair harassment of homeowners, and the impending disbanding of the BBI with the passage of Prop G. 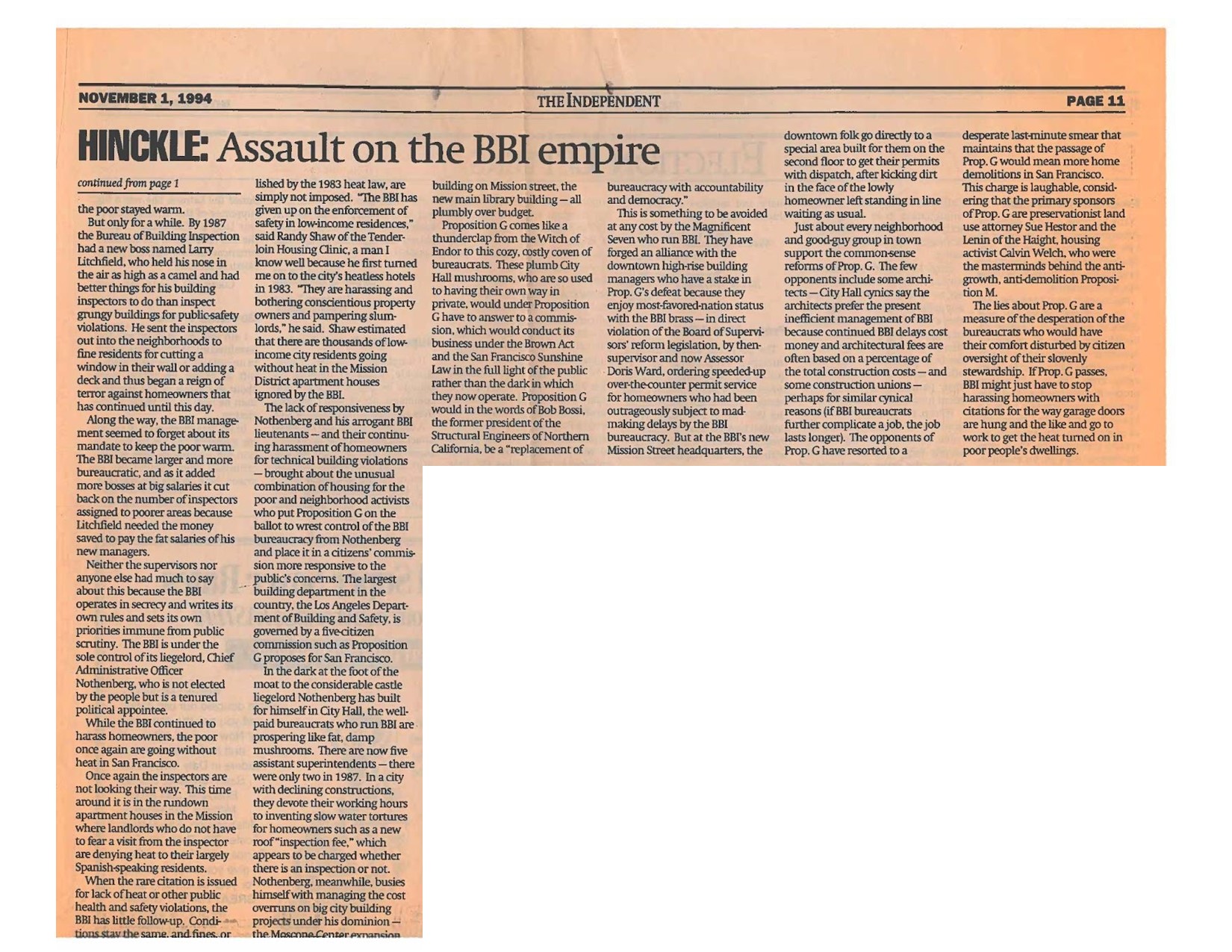 Assault on the BBI Empire

Proposition G in next Tuesday’s vote, which transfers control over the city’s building inspectors from the emperor-like Chief Administrative Officer, Rudy Nothenberg, to a commission of citizens, is on the ballot because Nothenberg and his inspectors broke one of the biggest promises the city ever made: it promised to keep its poor people warm in winter.

Around Christmas time of 1983, nearly 11 years ago as the crow flies, I wrote a series of articles in the Chronicle about heatless hotels in the Tenderloin and the Mission where heartless landlords kept the heat turned off on elderly residents. The situation was so bad that some of the hotels I checked on didn’t even have boilers in the basement. The owners had pulled them out and sold them for scrap and left their frail tenants to sit shivering in their rooms wrapped in blankets. Merry Christmas.

No one knew about this because city building inspectors never bothered to inspect these hotels, which were, after all, only for poor people. Mayor Dianne Feinstein then became quite upset and ordered the inspectors into these miserly hotels pronto. Citations were written and fines imposed and heat restored. The Board of Supervisors passed 11-zip, an emergency law that said hotels and apartment houses had to provide heat for their residents. Thus San Francisco took another step toward civilization and for a while the inspectors kept inspecting and the poor stayed warm.

But only for a while. By 1987 the Bureau of Building Inspection had a new boss named Larry Litchfield, who held his nose in the air as high as a camel and had better things for his building inspectors to do than inspect grungy buildings for public safety violations. He sent the inspectors out into the neighborhoods to fine residents for cutting a window in their wall or adding a deck and thus began a reign of terror against homeowners that has continued until this day.

Along the way, the BBI management seemed to forget about its mandate to keep the poor warm. The BBI became larger and more bureaucratic, and as it added more bosses at big salaries it cut back on the number of inspectors assigned to poorer areas because Litchfield needed the money saved to pay the fat salaries of his new managers.

Neither the supervisors nor anyone else had much to say about this because the BBI operates in secrecy and writes its own rules and sets its own priorities immune from public scrutiny. The BBI is under the sole control of its liegelord, Chief Administrative Officer Nothenberg, who is not elected by the people but is a tenured political appointee.

While the BBI continued to harass homeowners, the poor once again are going without heat in San Francisco.

Once again the inspectors are not looking their way. This time around it is in the rundown apartment houses in the Mission where landlords who do not have to fear a visit from the inspector are denying heat to their largely Spanish-speaking residents.

When the rare citation is issued for lack of heat or other public health and safety violations, the BBI has little follow-up. Conditions stay the same and fines or citations published by the 1983 heat law are simply not imposed. “The BBI has given up on the enforcement of safety in low-income residences,” said Randy Shaw of the Tenderloin Housing Clinic, a man I know well because he first turned me on to the city’s heatless hotels in 1983. “They are harassing and bothering conscientious property owners and pampering slum lords,” he said. Shaw estimated that there are thousands of low-income city residents going without heat in the Mission District apartment houses ignored by the BBI.

The lack of responsiveness by Nothenberg and his arrogant BBI lieutenants– and their continuing harassment of homeowners for technical building violations– brought about the unusual combination of housing for the poor and neighborhood activists who put Proposition G on the ballot to wrest control of the BBI bureaucracy from Nothenberg and place it in a citizens’ commission more responsive to the public’s concerns. The largest building department in the country, the Los Angeles Department of Building and Safety, is governed by a five citizen commission such as Proposition G proposes for San Francisco.

In the dark at the foot of the moat to the considerable castle liegelord Nothenberg has built for himself in City Hall, the well-paid bureaucrats who run BBI are prospering like fat, damp mushrooms. There are now five assistant superintendents – there were only two in 1987. In a city with declining constructions, they devote their working hours to inventing slow water tortures for homeowners such as a new roof “inspection fee.” which appears to be charged whether there is an inspection or not. Nothenberg, meanwhile, busies himself with managing the cost overruns on big city building projects under his dominion – the Moscone Center expansion, the building on Mission street, the new main library building-all plumbly over budget.

Proposition G comes like a thunderclap from the Witch of Endor to this cozy, costly coven of bureaucrats. These plumb City Hall mushrooms, who are so used to having their own way in private, would under Proposition G have to answer to a commission, which would conduct its business under the Brown Act and the San Francisco Sunshine Law in the full light of the public rather than the dark in which they now operate. Proposition G would, in the words of Bob Bossi, the former president of the  Structural Engineers of Northern California, be a “replacement of bureaucracy with accountability and democracy.”

This is something to be avoided at any cost by the Magnificent Seven who run BBI. They have forged an alliance with the downtown high-rise building managers who have a stake in Prop. G’s defeat because they enjoy most-favored nation status with the BBI brass– in direct violation of the Board of Supervisor’s reform legislation, by then-supervisor and now Assessor Doris Ward, ordering speeded-up over-the-counter permit service for homeowners who had been outrageously subject to mad-making delays by the BBI bureaucracy. But at the BBI’s new Mission Street headquarters, the downtown folk go directly to a special area built for them on the second floor to get their permits with dispatch, after kicking dirt in the face of the lowly homeowner left standing in line waiting as usual.

Just about every neighborhood and good guy group in town support the common sense reforms of Prop. G. The few opponents include some architects – City Hall cynics say the architects prefer the present inefficient management of BBI because continued BBI delays cost money and architectural fees are often based on a percentage of the total construction costs – and some construction unions – perhaps for similar cynical reasons (if BBI bureaucrats further complicate a job, the job lasts longer). The opponents of Prop. G have resorted to a desperate last-minute smear that maintains that the passage of Prop. G would mean more home demolitions in San Francisco. This charge is laughable, considering that the primary sponsors of Prop. G are preservationist land use attorney Sue Hestor and the Lenin of the Haight housing activist Calvin Welch, who were the masterminds behind the antigrowth, anti-demolition Proposition M.

The lies about Prop. G are a measure of the desperation of the bureaucrats who would have their comfort disturbed by citizen oversight of their slovenly stewardship. If Prop. G passes, BBI might just have to stop harassing homeowners with citations for the way garage doors are hung and the like and go to work to get the heat turned on in poor people’s dwellings.